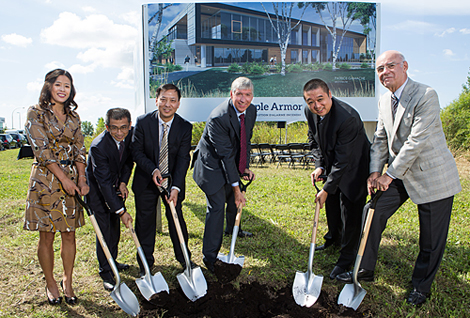 The 100,000-sq.-ft. plant being built in the city’s industrial park represents a total investment of $30 million. This is one of the first Chinese manufacturing investments to be made in Québec.

Maple Armor Canada, which is expected to create 70 new jobs in the region, received an interest-free refundable loan of $3 million and a non-refundable financial contribution of $1 million from Investissement Québec.

The announcement was made in the presence of Weimin Cai, President of Maple Armor Canada, Zhendong Xu, Chairman of the Board of parent company Beida Jade Bird Group, Jacques Daoust, Minister of the Economy, Innovation and Exports, and Martin Murray, Mayor of Saint-Bruno-de-Montarville.