has just opened a new studio where it plans to produce nine animated movies by 2020. 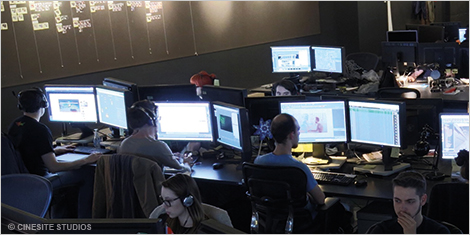 Estimated at $90 million, the expansion will enable the company to purchase new computer hardware and hire 500 new artists, technicians and producers in the coming years. Cinesite received a $2.4-million loan from Investissement Québec for the expansion, along with a $19.6-million loan guarantee to help finance the first three animated movies that the studio will produce in Montréal.

“The support we received has allowed us to make this decision to invest, for ourselves and the city of Montréal,” said Peter Nagle, Chairman of Cinesite. “Together we can use this investment to kick-start a world-class animation hub in one of the coolest cities in the world. The new studio will enable us to increase our visual effects production capacity—already widely recognized—by 100%.”

“Investissement Québec’s role goes far beyond providing financial assistance,” explained David McFarlane, Investissement Québec’s business developer in London. “In 2014, we worked with the executives of Cinesite on opening their first special effects studio in Montréal. The very next year, we were already discussing expansion plans and exploring the possibility of producing animated movies in Montréal. Our next step was to do everything we could to make sure the project would proceed, including facilitating access to budgets for training the employees who would create those movies.”

Since Cinesite opened its special effects studio in Montréal in 2014, it has worked on several movies, including X-Men: Days of Future Past, San Andreas and The Man from U.N.C.L.E. The company currently has a number of movie projects in the works, including Charming, starring Demi Lovato and Avril Lavigne and slated to be released later this year, and Klaus, which will be produced at the new Montréal facility.

“Montréal is one of the coolest cities in the world,” says Peter Nagle, Chairman of the Cinesite Board of Directors. Find out why!