IQ a Strong Presence at the Québec City Conference

The Québec City Conference, one of the largest international meetings on finance, was held from October 21 to 24 at Fairmont Le Château Frontenac. Investissement Québec is proud to have taken part as a major partner for the third straight year, and to have positioned itself as a key player in the province’s venture capital ecosystem. 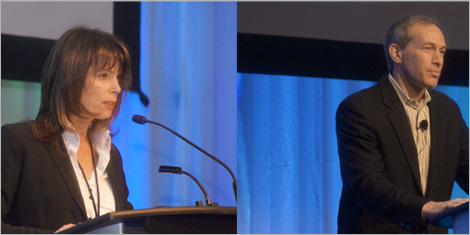 As part of the opening conference on venture capital and innovation, Sylvie Pinsonnault, Vice-President of Investment Funds, Business Immigration and Tax Measures, had the privilege of speaking to entrepreneurs, major institutional investors, and managers of sovereign wealth funds and venture capital funds about the vital role the Corporation plays in financing innovation in Québec. Thanks to its network of over 80 investment funds representing $800 million under management, Investissement Québec has the capital to support the promising projects of innovative entrepreneurs, and can also connect them with industry experts to mentor and guide them to success. Pinsonnault also stressed how venture capital can significantly drive the growth of technology companies and boost Québec’s economic development. She reiterated that Investissement Québec is one of Québec’s foremost venture capitalists. By using its network of funds and its numerous portfolio companies and by co-investing with its partner funds at the venture capital stage, Investissement Québec can support those companies that have the potential to become tomorrow’s leaders.

In addition to this forum, Pinsonnault had the honour of introducing Jess Bussgang, a renowned speaker and a senior partner at Flybridge Capital Partners, one of the largest venture capital firms in Boston.

Sébastian Boisjoly, Director of Investment Funds, also took an active part in the meetings and events, thereby enabling him to forge ties within the international network, meet with leading fund managers to promote collaboration, and discuss the major trends in venture capital today.