Pratt & Whitney Canada to Invest Over $1 Billion in R&D

The next generation of high-performance aircraft engines will soon become a reality at engine manufacturer Pratt & Whitney Canada (P&WC), which will invest over $1 billion in R&D over the next four and a half years, including about $650 million in Québec. 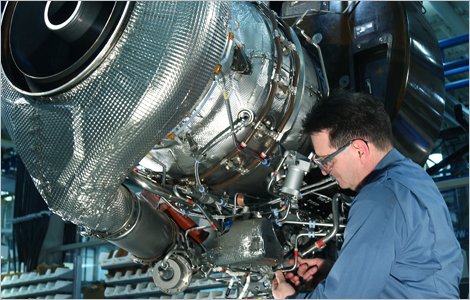 The company, which is receiving a $300 million repayable contribution from the Canadian government, plans to develop lighter and quieter high-performance engines that consume less fuel and produce lower emissions. “P&WC will be able to pursue its long-standing legacy of innovation and sustain its engineering and manufacturing centres of excellence in Québec, Ontario, Alberta and Nova Scotia,” said P&WC President John Saabas at the press conference.

The investment will enable P&WC to preserve some 1,500 jobs in Québec and Ontario, including close to 1,000 jobs at its Longueuil facilities, currently the object of an extensive upgrading project. One year ago, P&WC announced a $275-million investment in the plant, which is being transformed into a world-class centre of excellence for intelligent manufacturing. The centre, which should be fully operational in 2015, will feature three new intelligent production lines manufacturing key components for the new-generation family of PurePower® engines.

Over the last decade, P&WC has invested an average of $450 million a year, joining the ranks of Canada’s top R&D investors. Those continuous R&D investments have allowed the company to certify more than 100 engines over the past 25 years, a benchmark in the aerospace industry.

Founded in 1928, P&WC is a global leader in aerospace. Based in Longueuil, Québec, P&WC is a wholly owned subsidiary of U.S. multinational United Technologies Corporation. P&WC employs 6,200 people in Canada, including 5,000 in Québec.

Québec: your next destination

Québec accounts for 55% of Canada’s total aerospace production, representing sales of more than $12 billion in 2013. The Québec aerospace industry employs over 43,000 people and is known for its vitality and global competitiveness. The Greater Montréal region, home to some 215 leading companies in the industry, is a global aeronautics centre, rivalling Seattle and Toulouse. Learn more