Close to 8,300 people work in the microelectronics industry (2012) in Québec, the majority of whom are employed by ten major players, including IBM, Esterline, Matrox and Teledyne DALSA. The main areas of activity are:

The main SMBs and multinationals
operating in Québec
Expand/Collapse

Innovation and R&D are the cornerstones of success in the microelectronics industry. Québec companies excel in both areas, enabling them to meet market needs and keep costs competitive.

Founded in 2011 through a unique partnership between the Université de Sherbrooke, Teledyne DALSA and IBM Canada, C2MI is the largest electronics systems R&D centre in Canada and an international hub of innovation. The centre represents an investment of over $220 million. (C2MI

With its 750 researchers, C2MI is a crucial link in the North American microelectronics ecosystem, and one of the world’s most important hubs in this field. Its mission is to be the global leader in the packaging of next-generation chips. More specifically, through its work, C2MI aims to

In addition, C2MI serves as a bridge between academic research and the private sector, helping achieve the common goal of manufacturing complex microelectromechanical systems (MEMS).

Other university research groups and laboratories in microelectronics
Expand/Collapse

Québec has about a hundred companies specializing in microelectronics and employing a combined total of over 8,300 people. Those companies are located within 100 km of Montreal, near the U.S. border.

This sector is best known for its R&D on new products for international clients.

Located in Bromont, IBM’s Québec plant is the company’s largest semiconductor assembly and testing facility in the world and its only plant in Canada. The facility transforms the world’s most advanced semiconductors into state-of-the-art microelectronic components, including the logic circuits that are the brain for IBM’s Watson systems.

Manufacturing and inspection processes and systems are behind the major technological strides made in this sector over the past few years.

C-MAC MicroTechnology is a multinational company that manufactures hybrid circuits, mainly for the energy and automotive markets.

Esterline is an international manufacturer of electronic products for the telecommunications, aviation and defence markets. Its Montréal facility specializes in special electronic and hybrid microcircuits, displays and custom manufacturing of complex circuit cards.

Excelitas Technologies is a world leader in the design and manufacturing of complex products such as pulsed semiconductor lasers, photonic detectors and hybrid components for preamplifiers.

With 40 years’ experience in designing hardware and software solutions for graphics, video, imaging and machine vision applications, Matrox has earned a reputation as an industry leader.

MPB Technologies conducts leading-edge R&D in the areas of telecommunications, robotics, space and photonics. The company puts its science to work for many international astronomy projects. Among other things, it provided the fibre laser pumps for the most powerful laser guide star system in the world, inaugurated in April 2016 at ESO’s Paranal Observatory in Chile.

The companies in this sector manufacture passive circuits and provide electronic component assembly services for such niche applications as custom cables, along with high-value-added components for specialized markets.

Operating in a number of countries, including the United States, Chile and Vietnam, Gentec designs, manufactures and markets custom solutions for its clients. The company specializes in integrated energy management systems and designs battery, modem and Ethernet chargers, data acquisition systems, electric meters, capacitors and charging stations for electric vehicles.

With close to 25 years’ experience under its belt, Varitron is a leader in Québec's microelectronics industry. The company is recognized for its commitment to excellence and its expertise in manufacturing cutting-edge smart electricity meters.

took another big step in growing its Québec operations. See how Investissement Québec brought these major industry players together to help make it happen! 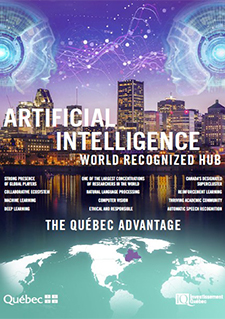