Aerospace
Touch down in the heart of the action

When it comes to Canada’s aerospace industry, Québec is top of mind! Aerospace in Québec is a major driving force for the province's economy and is known for its innovation, vitality and global competitiveness. The statistics speak for themselves:

The strength of Québec’s aerospace industry, which generated sales of $15.3 billion in 2018, can be attributed to a solid, dynamic industry cluster built around a stable core of internationally renowned businesses. This translates into an unparalleled capacity for production and research.

One of the factors that set Québec apart is that it has four major prime contractors operating in key sectors: aircraft and helicopter manufacturing, engine design, flight simulators and pilot training. Prominent technical centres and world-class equipment manufacturers are also located here. This mix of complementary players underscores the vigorous, vibrant nature of Québec's aerospace industry.

The industry is supported by an extensive network of airport, highway, railway and marine infrastructures that enable aerospace companies to serve the North American and international markets effectively. Québec has: 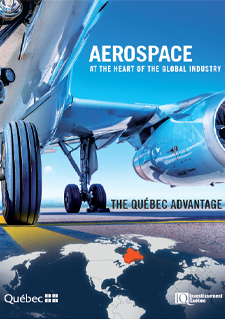