Hannover Messe: The Epicentre of Robotics

This won’t be the first trip to Germany for Robotiq, which has a strong network of resellers and suppliers there, but it will be its very first booth in the Québec pavilion, where it will display its new products to over 220,000 visitors. In addition, several exhibitors will present its innovative products such as the 2F-85 gripper and the Hand-E, its adaptive two-fingered “hand.” 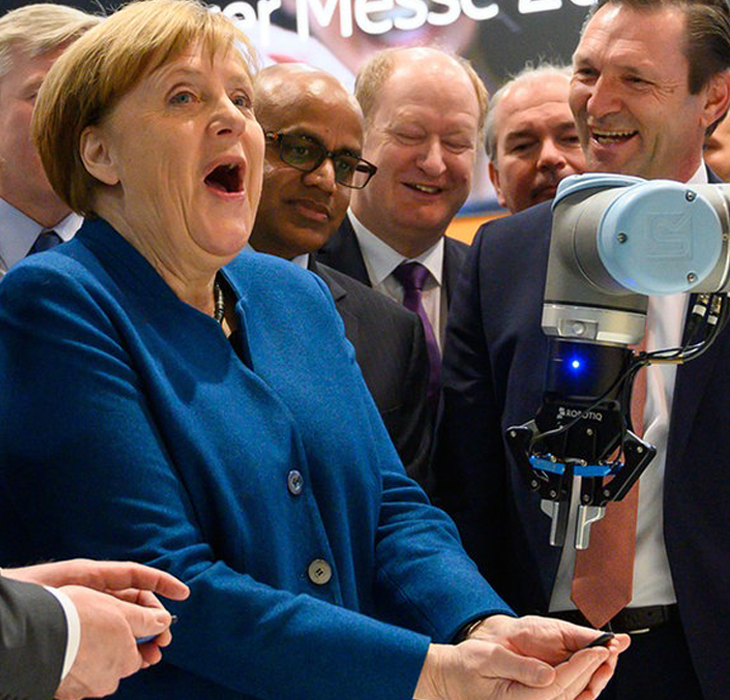 The Robotiq team plans to explore the 1,400 events and 6,500 exhibitors in attendance to discover ground-breaking inventions. It expects to see innovations in the area of collaborative robots, particularly at the booths of such companies as Universal Robots, OMRON Electronics, Techman Robot and YASKAWA Europe.

“Hannover’s huge and it’s really easy to get lost in the shuffle. So when we’re associated with the credibility of the government mission, it allows us to cut through the noise and meet some key people,” said Samuel Bouchard, co-founder of Robotiq. “It’s one of the biggest fabrication technology fairs in the world, and if you want to be world-class in this field, you’ve got to be there!”

Democratizing robotics
When Vincent Duchaine, Jean-Philippe Jobin and Samuel Bouchard launched Robotiq in 2008, the field was at a low point. However, those years of economic slowdown enabled the young company to better identify the need its technology could meet. “We realized that the real problem isn’t creating customized robot hands but putting robotic systems in factories. The complexity of the installation process turned decision-makers off. Based on that finding, we concentrated on what’s called Plug & Play, and then we started to see more interest from our distributors and customers,” recalled Samuel.

More than ten years later, “Help Wanted” signs dot the province’s industrial parks and the crying need for solutions to the labour shortage is opening the door to new technologies. “Now we’re in a period where there’s lots of work in factories but not many people to do it, and our job is really to democratize robotics. The easier it is, the more people will dare to use it, and then everyone can increase their productivity,” explained Samuel.

From users to bellwethers?
Germany is an example of productivity in many respects: “The Germans are very rigorous and organized and they don’t hesitate to invest in renewing their machinery and equipment. Their country is much more automated than Québec,” explained Marie-Andrée Bernard, Business Development Director for Investissement Québec’s Munich office.

, reveals that, despite the importance of integrating new technologies, less than 20% of Québec manufacturing companies are more than 50% automated, whereas in the U.S.A. the proportion is 55% and in Germany it’s 75%. Moreover, 85% of what Robotiq manufactures in Lévis is exported outside Canada.

“German is really the epicentre of robotics in Europe. So there are lots of partners and distributors. That’s where you find the head offices that are making decisions about the technologies they’ll use in the robotization of their plants, so it’s crucial to be there,” insisted Samuel. “But although we’re really proud to be world leaders in our sector, we realize that we’re exporting productivity abroad. That’s why it’s absolutely necessary for Québec to position itself in new technologies. They’re important levers for the local economy. We need to be suppliers, and not just users, so we can create wealth here in Québec.”